Do Americans Actually Want To Celebrate?

On 3rd September, we conducted a survey of 1015 Americans to see if they still consider celebrating this upcoming Labor Day despite their professions being badly affected by this pandemic.
Explore Now 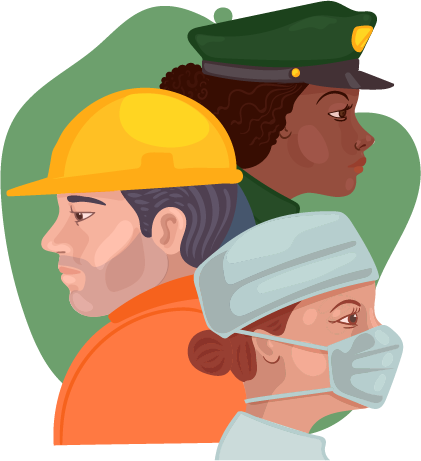 Labor Day is just around the corner, but ever since the outbreak of the Coronavirus, our economy has gone down drastically along with the fast increasing unemployment rate which is causing people struggle to get jobs, to put food on the table, or to purchase basic needs, etc…..

This is the reason why on September 3rd,  we conducted a survey of 1015 Americans to see if they still consider celebrating this Labor Day despite their professions being badly affected by this situation we are in. With the horrible coronavirus stripping away jobs and lives, will Americans still commemorate 2020 Labor Day? Here is what we found on the survey we conducted

60.3% Americans who took the survey are Males and the other 39.6% are females with both genders ages ranging between 24-39 which means a majority of 65% of the respondents are Millennials.

How Was Your Employability This Year?

Results show that nearly half of the Americans (47.3%) said that their employability was affected by the outbreak of the coronavirus. With the accurate calculation of the results, statistics exhibited that 1 in 10 Americans said that their job was heavily affected during this difficult time. The unemployment rate continues to rise, but the government is finding ways to mitigate it.

1 in 4 Americans were not into it

Centers for Disease Control and Prevention (CDCP) stated that the obstructive repercussions from the coronavirus plunged a lot of Americans into an unstable financial status which created pressure, tension, and stress on the mental health of the people affected which the CDCP asserted “Can be overwhelming and cause strong emotions to adults and children”

So it is not surprising that a lot of Americans cared less about Labor Day since the negative effects of the virus toppled down countless jobs preventing many people from enjoying their Labor Day.

Affected mindsets and financial problems led people too saddened to have the spirit to celebrate Labor Day. What supposedly would be a holiday of relaxation and celebration of achievements for workers, turned into a day of silence for others.

What Were The Reasons That Made This Labor Day Unwelcomed?

It is already reasonable enough that Americans were not into this upcoming Labor Day because a massive amount of people lost their jobs that led them to be financially insecure while the pandemic is only getting stressful by the time being. Moreover, the families of the workers involved are even more affected especially to those individuals who are depending on the employed person in the house. The World Health Organization (WHO) confirms the increasing rate of the demography of those who are affected by depression during this pandemic as well as the statistics of the rising amount of unemployment rate in the United States.

Based on the survey results, it showed that there was a fair amount of percentage for those Americans who did not have any interests on Labor Day whatsoever and the same went for the people who had been unemployed even before the pandemic started. Alongside with that set of data are workers that had not been productive for the last 8 months, meaning these workers had been inactive or idle in their jobs. Lastly, there was a small proportion of data for those respondents who had other reasons for American not being interested in this upcoming Labor Day.

How Much Did Americans Spend on Labor Day?

$ 0
is the maximum spending of nearly half of surveyed Americans

Unlike last 2017’s Labor Day, people took advantage of the Labor Day sale that was limited and special only for labor day. Consumers bought furniture, electronics, clothes, and mostly school supplies. However, compared to the upcoming Labor Day with the information gathered together, it shows that nearly half of Americans were not going to spend more than $100.

This massive amount of people are the ones that were badly affected by the negative effects of the virus and these effects and personal issues could vary from depreciation of salary, unemployment, shortage of money, struggling to get another job, business was not doing well, etc. Money may be tight, but survey results show that even though each individual was affected differently, Americans still considered buying products this upcoming Labor Day, but unlike before, people would spend their money on a minimal budget range because consumers find Labor Day sales an opportunity to save money from buying products that are on sale. There are still Americans out there that spent as much as $500-$700 on the go and a few that would spend $100-$700 and as well as above $700, but the people who spent below $100 overweighs those who spend more than that.

Some Americans Refused To Rest On Labor Day

The pandemic has been financially devastating and only a few jobs are available but the chance of depreciation for salary is high. This is the reason why Americans continued to work and hustled on Labor Day because they found Labor Day not worth celebrating if they were financially unstable. This made them worry about their finances instead of enjoying the holiday. Despite the risks of getting infected by the virus, these people still chose to continue working on Labor Day.

“The reopening of these businesses means that some workers have returned to work in service jobs even as new cases of COVID-19 continue to surge” stated by Xenia Shih Bion, Engagement Specialist from the California Health Care Foundation.

On the other hand, there is a reasonable amount of respondents that prefer to stay at home and spend time with their family. These are Americans that are financially stable but are still affected by the cut off of pay by their employers. It is just that they have acquired enough money to worry less about sustaining themselves which is why these people prefer to relax and stay at home with their family. However, the number of Americans that chose to work during Labor Day outnumbers those Americans who decided to just rest and stay at home during the holiday. The reasons for that could be that their employers did not allow them to file a leave or they themselves decided that they would still work despite that it was a holiday of commemoration and celebration of workers.

In conclusion, there is a vast amount of people that are affected differently per individual, and the survey shows that the majority of the people affected are struggling and they find it difficult to find a purpose to celebrate Labor Day in an unstable financial status. There are those who are unemployed, bankrupt, unable to get sales, forced to close their shops, etc. Creating more stress that even leads to depression and anxiety making it harder for them to find a reason to celebrate Labor Day which means that not only did the pandemic take away jobs and leading people financially unstable, it also damaged a lot of people’s physical and mental health that is why this upcoming Labor Day’s atmosphere will be very different compared to the other years since a lot of people do not want to commemorate the holiday for various reasons. Americans are looking forward to getting this pandemic over with and returning to their happy financially stable lives once again. It appears that this pandemic will not go away soon enough but despite everything that happened, Americans still continue to fight and find ways to deal with this temporary difficult time that we are in.

On 3rd September, we surveyed 1015 Americans to see if they still consider celebrating this Labor Day despite their professions being badly affected by this pandemic. The survey was launched on MTurk with the target location set to the U.S. We chose the Aprroval Rate above 95% to ensure the quality of the survey results. Within the survey questions, we also used the qualifying question to exclude the answer from those who are not Americans.

As the survey is based on self-reporting, please expect small telescoping and exaggeration. However, the data is reported transparently and we commit to being responsible for the authentication of the survey results.

Feel free to share and use the data for your non-commercial purpose. However, we do ask for a credit if you are going to use our work.

Please link back to this article so that people can view the full version of the survey.