Which Are The Names Complaint The Most on valentine's day?
which are the most-complained tourist attractions?

We have the answers. Let’s read on! 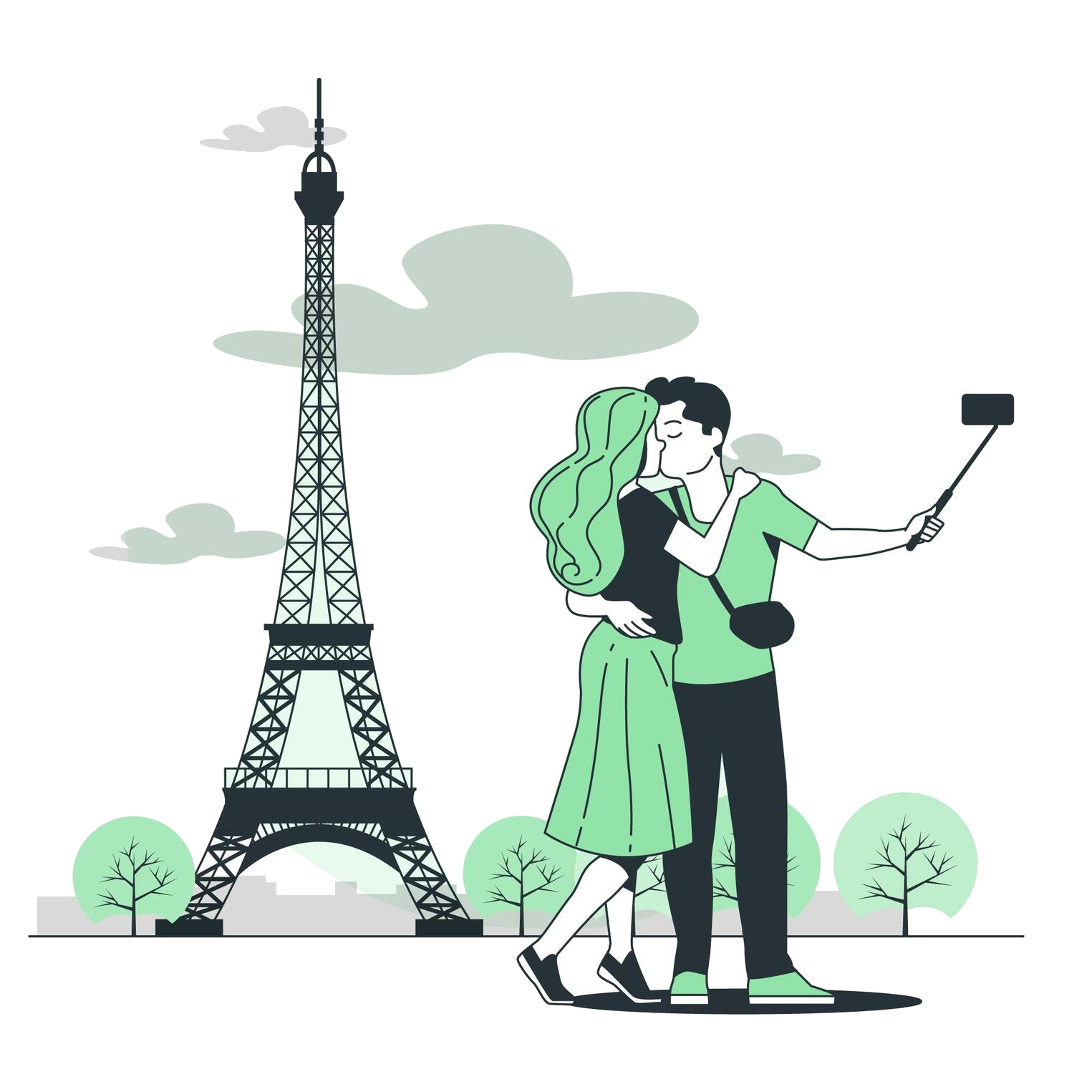 Everyone agrees that 2020 was the year of Karen. For those who are still behind, the name Karen was adapted to laugh and mock people who complained a lot about basic things. However, were Karen really the common complainers? For sure, they might be among the top, but not in the number one spot.

With Valentine soon approaching, there is a special group expected to start complaints about the day and various popular Valentine destinations. Below are the names of people who would most likely complain about Valentine dates.

Top 20 names most likely to complain on Valentine’s Day

Not surprisingly, women have more complaints about Valentine’s Day than men. However, men had the most reviews, with Mark and Deborah outdoing Karen for the first place in the list. 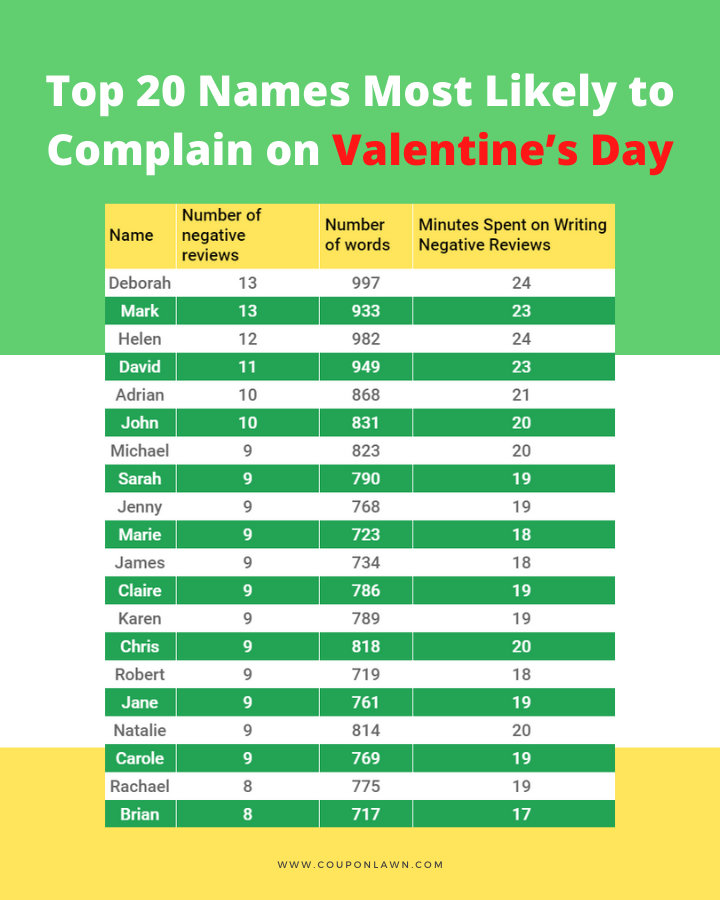 From the list, it appeared that 11 women and 9 men had negative feelings about Valentine’s Day. Generally, out of the top 20 complainers and a total of 399 minutes, men spent a combined total of 180 minutes as women spent 219 minutes.

On a national scale, the most popular rom-com movies for Valentine’s Day for each the three years were as follows: 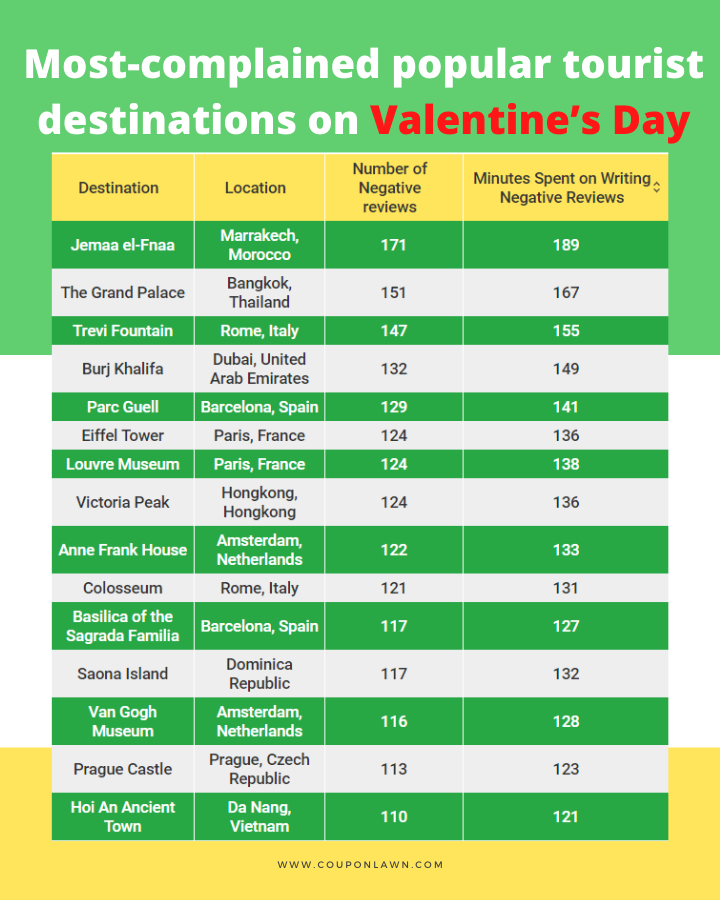 Though other destinations came close to this, the popularly known tower of love, the Eiffel Tower, came 7th on the list with an astonishing 124 negative reviews. Those who reviewed spent 136 minutes sharing their dissatisfactions. 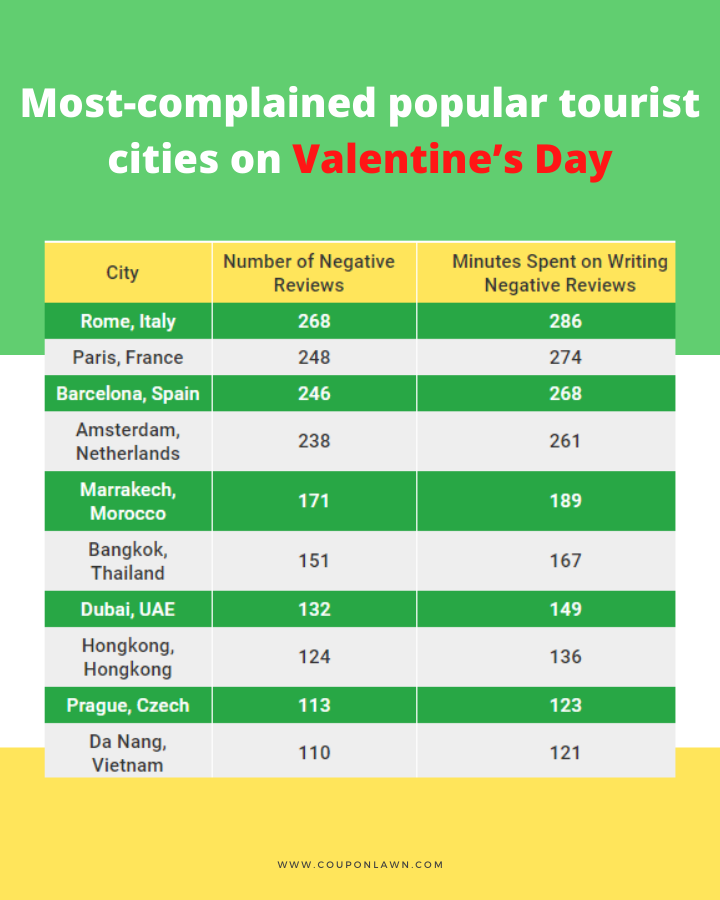 As for the cities, Rome was the most complained city with 268 negative reviews. People spent 286 minutes online sharing their disappointments about Rome. Paris, Barcelona, Amsterdam, and Marrakech made it to the top five, with a combined total of 1278 minutes spent in writing.

Interestingly, some cities had more than one destination on the list. People negatively reviewed the Eiffel Tower and Louvre Museum in Paris (France); Parc Guell, and Basilica of the Sagrada Familia in Barcelona (Spain); and Anne Frank House and Van Gogh Museum in Amsterdam (Netherlands).

Here’s how we find out the most common complainers on Valentine’s Day:

First, we gathered a list of the world’s most visited tourist attractions using this list from financial service corporation Mastercard. Next, we use Trip Advisor review pages to filter ‘poor’ and ‘terrible’ reviews. To ensure the reviews are written about couple travelers’ experience in Valentine trips, we continued to filter them by these settings:

And in the the review must mention “valentine”, or “valentine’s day”. We then collected the first names of the people who wrote these reviews in English.

To find out how much time was spent on writing those negative reviews, we divide the total number of words by average online typing speed.

If you know someone who could benefit from our findings, feel free to share this project with them. The graphics and content are available for noncommercial reuse. All we ask is that you link back to this page so that readers get all the necessary information and we receive proper credit.